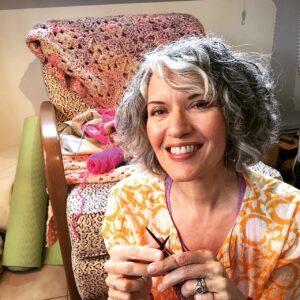 Maybe you know me as the author of Yoga Mind: Journey Beyond the Physical , the 30-day program of spiritual tools designed to help you realize the true meaning of Yoga–not a bunch of physical poses, but feeling aligned with your values and finding your path in life.

Or maybe you know me as the person who leads MedKNITation events at Vogue Knitting Live’s monthly virtual events, or you’ve done this form of meditation with knitting or crochet on Instagram, or even at a real yarn shop (ah, memories!).

However you know me, you may know I do both these things–talk about the beautiful ways Yoga philosophy can enhance our lives, no matter what spiritual or religious path we follow, and meditate with yarn. The two aren’t all that different, though for a long time, I haven’t connected them. Until now.

Yoga has been part of my life for over 30 years. I started, as many people do, with the physical practice, but I quickly found out that the poses were a very small part of what Yoga offers us. Once I found out more about the spiritual, philosophical practices, I was hooked.

Still, stress and bouts of anxiety and depression have been part of my life, and probably always will be. There have been times when the kind of meditation I practiced in Yoga ashrams was just impossible for me. Sometimes, it made me even more anxious! That was a bummer, for sure.

Then, in 2016–a time when we were all feeling pretty stressed out, I remembered taking knitting lessons back in 2001. Talk about a stressful time: the attacks on the World Trade Centers, a mile from where I lived then; the death of a close friend; another dear friend having a catastrophic injury; my job ending, my relationship ending, my cat dying. I mean… That was some stress.

When a friend said she was taking knitting lessons, I grabbed that lifeline, which I soon found was made of yarn. Knitting was so relaxing, so calming, so…meditative. Could this be a form of meditation? People I knew who studied meditation said no. My calmed nerves said otherwise.

Becoming a caregiver, work, and life took me away from knit therapy for a while, but in 2016, I remember the feel of the yarn as it moved through my fingers, a bit more softly than my mala beads. I picked up my knitting needles and, later, a crochet hook, and I began using the repetitive motions as an active meditation. Some of my teachers still said it wasn’t meditation; I said, tomato, tomahto.

Outwardly, on social media and in newsletters, I was talking more about Yoga philosophy and Yoga Mind than I was about my knitting meditation. Then people started hearing about this meditation I was doing with knitting and crochet, and they asked me to teach it. First, to a small room full of knitters at Knitty City, my beloved yarn shop in New York. Then, over time, to about 150 people at Vogue Knitting Live New York. And, years later, at every Virtual Knitting Live event for the past almost two years. I started teaching as much MedKNITation, my system of meditating with knitting or crochet, as I was sharing what I’d learned in Yoga Mind.

I wasn’t sure whether the people who knew me from Yoga Mind would wonder, “What’s she going on about with this knitting thing?” or if the people who liked MedKNITation would ask, “Yoga? She wants us to knit and crochet on mats while doing headstands?” (Seriously, don’t try this. Though you could try stitching as part of deep relaxation.) I kept my two paths separate, and, predictably, I always felt divided.

Yoga is a Sanskrit word meaning union. When we follow the path of Yoga and practice the tools, we feel united within ourselves. Here I was talking about Yoga, but in this part of my life, I wasn’t practicing it! Oy.

Now, I am… me. Not the Yoga Mind person or the MedKNITation person, but someone who practices Yoga philosophy (to the best of my ability) and meditates by knitting and crocheting. Yoga and yarn… At first they may not seem to go together, but when you feel what they do for you, they’re completely connected.

However you know me, if you want to feel more connected and aligned, try the 30-day program in Yoga Mind and the guided audio MedKNITation and Deep Relaxation. And let me know how these work for you! I learn so much and am so inspired by your experiences.

Thank you for listening, my friend.