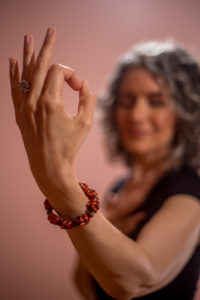 Our imaginations never get a better workout than when we’re thinking up the worst-case scenario. When faced with problems, or even potential problems, our minds are better than Hollywood at constructing outcomes ranging from embarrassing to outright awful. And multiple versions, too! The energy expended and the production values of these fantasies would be admirable if they weren’t so upsetting.

We get faced with questions and conundrums all the time. Just this week, a situation came up where I really didn’t know what was going on. At stake: embarrassment, on a fairly large scale.

Immediately, my mind began concocting scenarios, none of them positive: This could happen. That could happen! And that—!! All the while, my body was reacting as though the imagined things were actually happening.

Yet none of this was real. My Yoga Mind, the part that calmly observes all the crazy things my fearful mind concocts, reminded me of that fact. Then I asked myself why, instead of thinking up worst-case scenarios, I didn’t try imagining best-case scenarios.

What was the harm? I was missing vital information that would solve the problem, and I wasn’t likely to get it soon. I might at some point. Until then, why torture myself? When I began thinking of best-case scenarios, free from embarrassment and full of good outcomes and fun instead, I felt better. I felt good. I was happy.

This is a form of Pratipaksha Bhavana, otherwise known as the Yoga Thought-Swap Trick. It comes from The Yoga Sutras, wherein Yogic wise man Patanjali advises that when negative thoughts arise, they should be replaced by opposite, or positive thoughts.

The opposite of the worst-case scenario is the best possible outcome. Why be disappointed ahead of time? Often our visions of the worst outcomes do nothing to prepare us for them. We just sit in fear, tormented by our own thoughts.

Instead, use the Yoga Tool of Pratipaksha Bhavana. Swap out those negative thoughts for positive ones and imagine the best-case scenario. Who knows? Those dreams may come true in some way as your thoughts guide your actions.