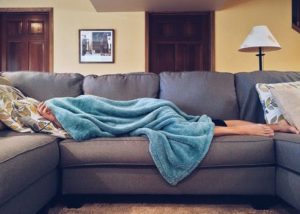 My mother warned me. Mothers have a reputation for being right that makes their daughters want to rebel, even though they know in the end they’ll be tapping out of a no-win argument like the lesser wrestler. Still, even Mom couldn’t blame me for wanting to take my three LEGO-obsessed nephews to the first LEGO Live event in our area during one of the worst flu seasons ever.

(Have you noticed lately that every flu season now is “the worst flu season ever”? You can’t win anyway.)

Mom: “You’re going to get sick. All those kids, all those germs…”

Off we went. The boys had a fantastic time. The youngest projectile vomited on the way home. And I was on my knees before the throne two days later.

I’m celebrating my first day of being able to sit upright, think clearly, and eat a full breakfast by reflecting on the upsides of being down with the flu. Not that I’d wish it on anyone, but since this is the worst flu season EVER, chances are good that you’ve had it, have it now, or will catch it from some little adorable kid handing you a LEGO piece.

Mandatory rest. Flu, colds, and any illness that doesn’t inflict a great deal of pain but body checks you out your daily routine by forcing you into a light, airy coma all have one benefit: mandatory rest. We don’t get enough sleep, and we don’t even try anymore. We’re up late on social media for God knows what reason, or reading, or knitting (guilty as charged), or working, or whatevering. Being sick in a way that prevents you from doing much of anything means you’ll finally get some rest. In fact, that’s what your body wanted all along. And since you wouldn’t cooperate, well, it took matters into its/your own hands.

A free trial period of fasting. If you’ve heard that fasting has health benefits, but you thought you’d pass out if you tried, no worries. Flu will help you fast, and mandatory rest means you’ve already passed out. Two for one!

A crash course in Intuitive Eating. Once your trial period of fasting is over, you’ll want to eat something—but not just anything. In fact, hardly anything! Your body will automatically, even involuntarily express a range of reactions from complete revulsion to mild interest, depending on the food suggestion. You can toss that diet right out the window and throw your layman’s nutritionist superfood education under the bus. Your body’s intuition about what it wants, and definitely doesn’t want, will display itself like the gamut of emotions displayed in the entire Lord of the Rings series. This is Intuitive Eating, a non-diet plan that asks us to do something as fantastical as stories of Hobbits and Orks and the whole Middle Earth crew: eat what our bodies are actually asking for. I know, crazy, right? But flu will get you there. Whether you want to go or not.

Quiet time. Pratyahara is the Yoga Tool of sensory deprivation, or quiet time for your senses. No visual, aural, or other kind of stimulation. Dim room, as quiet as possible, nothing going on. This really helps you recharge your batteries. This really hardly ever happens. Flu makes you make it happen. And it’s kind of nice. Just you and a big cocoon of a comforter…

Slow re-entry. Flu, having effectively knocked you on your butt, leaves gradually, and you are treated to a nice, easy landing back on planet Earth. You may feel just well enough to sit up and maybe read a bit before taking a nap from all the exertion of eating a bowl of rice or some toast. In fact, maybe you feel well enough to clean the house, or even go into work, just, y’know, for the morning… Cue slow-mo shout of NOOOOOOOO. Please don’t cheat yourself of this important part of the whole flu-has-hidden-gifts thing. The slow re-entry into reality is the weekend you read about in the New York Times, the article with the picture of people wearing soft clothes and lounging around with mugs of steamy goodness while reading the paper. The slow re-entry is the entire basis of hygge. Do not bypass this stage. For one thing, you may end up prolonging your illness. And more important, this is the actual nice part of being sick, where you’re still sick enough to beg off all responsibilities other than existing, and well enough to enjoy it.

These were my upsides to being down with the flu. My hope is that I find a way to incorporate the really good ones without having to be violently ill. Stay well, beautiful people. 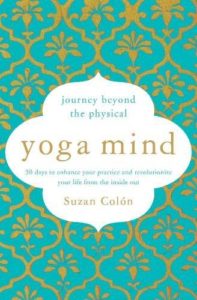 Learn how to find hidden benefits when life throws you a curve ball with 30 spiritual tools for happiness and mindfulness in Yoga Mind: Journey Beyond the Physical.